Last month I baked pretty much only lemon cakes. I had been wanting to try Nigella Lawson’s lemon-syrup loaf cake from How To Be A Domestic Goddess for a while, and when the World Baking Day challenge finally gave me a chance to try a lemony cake. But I didn’t stop with that.

I tried 3 different kinds in total. 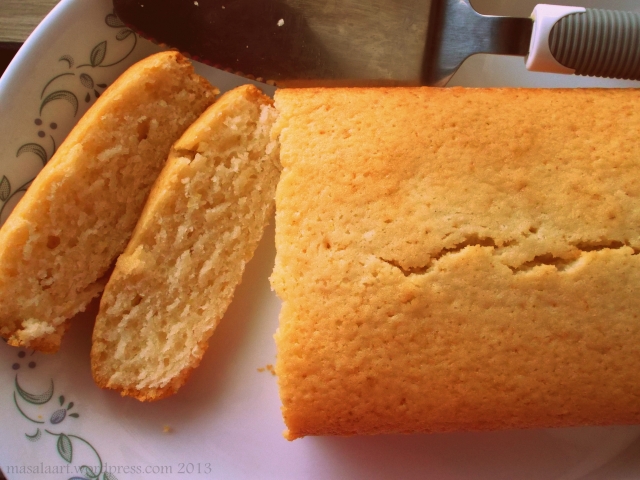 I baked Carmela’s lemon loaf  cake with syrup twice more; once when we had company and another time to send to family. Even though it does take more effort (you need to melt the butter and allow it to cool; then while the cake is baking you need to make the lemony sugar syrup,) it is worth it because the syrup ensures that the cake stays moist for longer. And once that lemon syrup gets into the cake, you get this really delicious sticky-crumbly crumb.

Donna Hay’s lemon-yogurt cake I did not attempt again; even though it is the simplest of the three, being a one-bowl affair. It’s tasty, no doubt- but  since it uses vegetable oil and not butter, I could not taste that richness that comes only from butter.

But there was one which I made over and over again; for family, friends, tea, for when we had company over and even just for myself. The vanilla bean and lime/lemon zest loaf.  I used nimbus (limes) the first time around, and used Meyer lemons for some other attempts. For the other two cakes, I followed specific lemon cake recipes. For this one, I tweaked a vanilla cake recipe and added lemon/lime zest and juice to it. It was not a lemon cake to begin with. But I love it because it produces a fluffy, moist which does not need syrup to keep it moist and ever-so-slightly damp. And the speckled vanilla seeds just add a touch of pretty.

So whether you have Meyer lemons, regular lemons or good old desi nimbus, I encourage you to try this 🙂

In my last post I mentioned how I had one more lemon cake recipe to try before I could decide which one I liked best. This one is by Donna Hay, from her Fast, Fresh & Simple series. It hits the marks on all of the above- because it is, like she promises, fast, fresh and simple.

Her recipe uses a fluted dish, but since I am obsessed with my loaf pans currently, I turned mine into a loaf. She adds no vanilla, so the cake is a little paler than the earlier ones I made- but the lemon flavour shines through.

For this cake, I used real lemons- my sister-in-law got me some Meyer lemons when got back from her vacation, and boy oh boy oh boy– are they GORGEOUS. I mean, I love myself a good desi nimbu, but these lemons are so fragrant, so floral- the flavour permeates every bit of the cake and lingers after you have finished eating a slice. And since the rind of the lemon is thicker and more buttery, the bits of lemon zest baked into the cake are soft and almost melt as you eat. Sigh. I wouldn’t mind holding one of these lemons all day and inhaling their blossomy scent. (Gawd. It almost sounds like I’m in love with the lemons! But that is what years of nimbus have done to me. Whoever created that Volkswagen ‘Lemon’ ad campaign in the 1960s never ate any of these fabulous lemon loaves.)

This cake is definitely yummy; more tart and dense thanks to the yogurt. Plus, it is easy to put together since it is pretty much a one-bowl recipe without too much mixing, whisking and folding.

Please don't use my stuff unless you give me credit for it or link back to me. All pictures on this blog (except those taken by me) are credited to the owners.
%d bloggers like this: