I made another batch of banana blondies. These didn’t have a crust to hold them up, but they didn’t really need one either. I used the recipe from Smitten Kitchen and added half a cup of mashed banana like Deb suggested.

The post itself talks about how adaptable blondie batter is, and all the diverse add-ins that complement it. Nuts. Bananas. Peppermint extract. Cranberries. Coconut. It’s a pretty forgiving batter that way…takes really well to diverse flavour combinations 🙂 And you can’t really go wrong, whatever you put in. (Unless you get totally freaky and add harissa paste or garam masala, then nothing can save your blondies.) 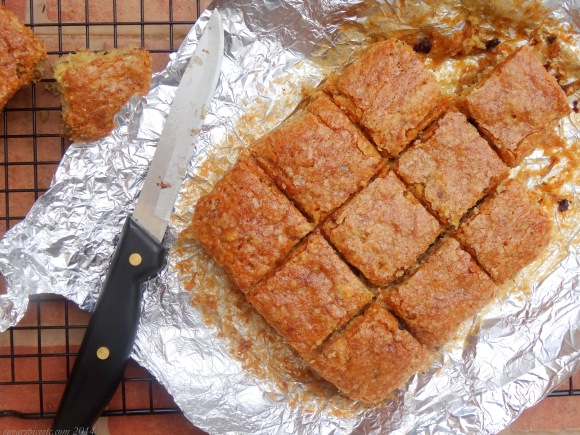 The original post was published in November 2006- a while ago. Just made me realize how long Deb has been cooking and sharing and tempting us with her versatile recipes and beautiful images. But if you look towards the bottom of the post, you’ll notice that she added an update as recent as May 24th, 2014- yes, less than a month ago- so I stand by my statement that there is a blondie renaissance happening in the blogosphere. Her update swaps melted butter for brown butter like Melissa Clark, a toning down of the brown sugar, and the addition of flaky sea salt. (Also- I feel the salty-sweet combination is majorly on-trend right now! Maple-bacon, chocolate-sea salt, and of course, classic salted caramel.)

The blondie batter is simple, and not very different from Melissa Clark’s, except for the proportions and the use of melted butter vs brown butter. Baked as plain blondies, they appear to be quite chewy…but that half cup of mashed banana brings on the fluff. So while this recipe yields a shiny, crackly top, beneath, it’s more banana bread than fudgy.

Jessica from How Sweet It Is also talks about the effect of bananas in blondie batter in a recent post. And it seems that adding bananas to batter generally fluffs things up. Her banana blondie recipe balances things out with egg yolks, which is a trick I must try.

Caramel-hued with a wrinkly top…

But in the meantime, here’s the recipe for a simple banana blondie. Dense or not, they’re still pretty darn good.

♥I folded in about 1/4 cup of broken walnuts and chocolate chips. Very little, because I had scant quantities that needed to be used up.

Please don't use my stuff unless you give me credit for it or link back to me. All pictures on this blog (except those taken by me) are credited to the owners.
Loading Comments...
Comment
×
%d bloggers like this: