I have been spending time in the kitchen, as always, and have made quite a few intersting things. Except that they did not turn out quite the way I expected them too. We all have a few kitchen flops. Here, I share 2 of mine with you.

First, I baked chocolate cupcakes. I had been wondering what would happen if one added melted cooking chocolate to cake batter, so I decided to try it out for myself, using this Joy Of Baking recipe with some tweaks. I had some decent cooking chocolate, cocoa powder, butter, eggs etc etc, and I was ready to bake. I also recently acquired silicone cupcake moulds, and I was super-excited to use them. I thought: no more greasing! No more spraying! No more praying! (that my cake doesn’t get stuck to the bottom of the pan.)

I made my batter and poured it in. My batter tasted great. (Yes, I do eat cookie dough and cake batter. Who doesn’t? Even the people who deny it and say ‘Ewww I would never do that, there could be raw eggs in there,’ yes, even they eat dough and batter. They are just afraid to come out. It’s ok. All in good time.)

Anyhow. I hoped my cupcakes would look like this: 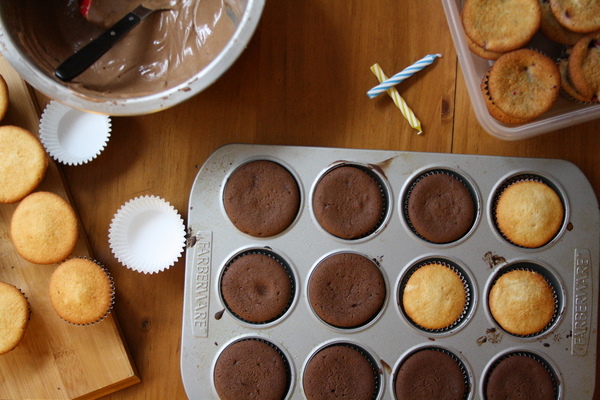 Except I poured a bit too much batter into each individual mould. And I didn’t grease the mould either, because hey! silicone. So My cupcakes rose and formed mutant tops, as big as those cookies at Subway outlets, and even though I used silicone, MY BATTER STUCK. TO THE BOTTOM. AND MY CUPCAKES CAME CRUMBLING AND TUMBLING OUT WHEN I OVERTURNED THE TRAY.

(You didn’t actually think I would post a picture of that, did you? I’m being nice enough sharing my culinary dumbassery with you. That should suffice for now.)

Oh, so embarassing! And the saddest part? The cake tasted wonderful and moist and gooey and chocolatey. I could not let all that wonderful-tasting destroyed cake go to waste. So, I cut the mutant tops off my chocolatey cupcakes and put them in a separate tin, labelled them ‘brownie cookies’ and fed them to people.

The lovely chocolatey cupcake crumbs, I placed in empty little bottles of Heinz baby food, tied a little ribbon around them, called them ‘crumbly browniecake mini-dessert jars,” and fed them to people.

This proves that people will always eat food that tastes good.

I felt terribly sad for a day, and then I figured, nothing went to waste, so it is time to stop wallowing in cake-induced sadness and move on to what I do better: cooking!

Another thing I have often thought about is: why don’t people use more peas in their pasta? I mean, there’s broccoli and zucchini and asparagus and cherry tomatoes and mushrooms and spinach and all kinds of awesome stuff going on with pasta, but I haven’t seen or eaten too many pea-pastas. And I saw a picture of it on The Canal House Cooks Lunch.

Does that not look glorious? And simple? And inviting? I decided to make some for dinner last week, with spaghetti. I had freshly shelled peas, enough spaghetti, cream, basil and garlic. I sauteed some garlic in olive oil, then added some cream and fresh basil and salt and pepper. All I had to do was swirl it into the pea-pasta.

Right. The peas. About that…well, I have found that whenever I cook peas, they just never seem to cook through. I may boil them, stir fry them, boil-and-then-stir-fry them, but they still come out a little hard and bullet-like. So this time, I wanted to make sure I would have soft peas. I pressure cooked the peas with a little salt. I then drained them. I then set my spaghetti to cook in a large pot, and added the pressure cooked peas along with it. There was no way the peas would be bullet-like.

Except they were. Some were soft and fresh, others were like little green bullets. At least I tried.

And you know something else? While the pasta tasted nice, the peas didn’t really do it for me. Not just because some were undercooked…it’s just not a combo I’m swooning over. Pea-pasta is just ok.

And those were my two recent flops in the kitchen.

Perhaps, dear readers, you have some advice on how to make pea-pasta better? Or how to use silicone moulds the right way?

11 thoughts on “Kitchen Flops: How To Indulge In Culinary Dumbassery”

Please don't use my stuff unless you give me credit for it or link back to me. All pictures on this blog (except those taken by me) are credited to the owners.
Loading Comments...
%d bloggers like this: